On June 24th— we were all shocked to learn that a condo tower in Surfside, Florida had collapsed overnight.

We have since learned that 97 Residents died in that collapse.

It was tragedy that not only stunned South Florida— it’s stunned the nation.

AND it’s left many of us wondering “is our building safe?” “Are we next?” “Should we continue to live in a high rise?”

Lying On The Beach’s Lois Whitman Hess and Steve Greenberg talk with Jonathan McClintock about this issue.

Jonathan is a District Manager for KW Property Management & Consulting.

He oversees 14 Luxury Hi-Rise Condominium Buildings in Miami-Dade and Broward Counties — including one building in Surfside.

Jonathan talks about the structural fears of Hi-Rise living and what can residents do to insure our buildings are safe. 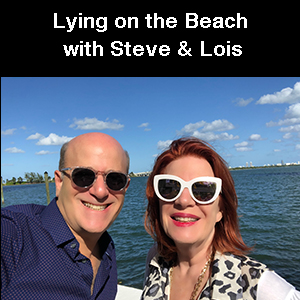 Lying On The Beach
Surfside Tragedy -- Is Condo Living Safe?

Ana Thue is currently a student at Emory University getting her degree in Physical Therapy. She hopes that one day she’ll become a physical therapist for dancers.

BUT that’s NOT why we are talking to Ana— its because of where she lives— It’s a TINY HOUSE — that means a house that is UNDER 400 square feet.

And the trend to live in a TINY HOUSE is HUGE and Ana is part of that trend— Lois Whitman Hess & Steve Greenberg talk with Ana and get a look at what it’s like to live large in a small house.

Lying On The Beach
The TINY HOUSE Trend is HUGE Are You Ready To Live Small?

In this episode Lois Whitman-Hess and Steve Greenberg are Lying On The Beach On Camera with the CEO behind the social media marketing app Ripl.

Clay McDaniel is the CEO of Seattle-based Ripl, Inc.

Sort of what WordPress is to setting up a blog, Ripl is to video content creations.

Simply put, Ripl is like the Swiss Army Knife of content creation and distribution for small businesses.

It’s all about helping small business make a BIG impression on social media.

Lying On The Beach
If You Own a Small Business, This App Could Be A Game Changer

David Chesky is an American pianist, composer, producer , arranger, and co-founder of the independent, audiophile label Chesky Records. He is also co-founder and CEO of HDtracks, an online music store that sells high-resolution digital music.

We are talking to David today because he composed an opera for children that teaches about the absurdity of war and acceptance of cultural diversity while exposing them to classical music. It’s called “The Mice War.” David also turned the opera into an animated movie and a soon to be produced children’s book.

The Blue Mice need to make more money so they decide they need to have a war.

The reason for the war?

What would happen if the Red Mice came and made the Blue Mice eat yellow Cheese?

Dr. Bruce Yaffe wants to know why a certain medicine he is well acquainted with is not being used as a treatment for Covid-19. He has no real proof that it works for everyone, but the few very sick patients he prescribed it to got significantly better within 24 hours. They all are well today. Dr. Yaffe is not saying this is the cure all, but he does want the research labs to do deep investigation on the drug.

What is it? You will just have to listen to the podcast to find out.

Dr. Yaffe is board certified in both Internal Medicine and Gastroenterology. His practice has been a fixture for patients on the Upper East Side for more than two decades. He is now a concierge doctor affiliated with Lenox Hill Hospital and NYU Langone Medical Center. He has been recognized as a Castle Connolly Top Doctor® for over 10 years.

TV personality Steve Greenberg and Editorial Consultant Lois Whitman-Hess set the record straight on “Lying on the Beach On Camera.” NYC is the heart of the universe and it will only get better as time marches on. Those who ran away will have huge regrets. They are probably bored out of their minds. New York at its worse is better than listening to the endless hum of crickets.

You may have seen one and not even known it and now Peacock, NBC’s new streaming channel has a series called “The Capture” — it is all about how an incriminating security video might actually be fake video.

So how do we know what to believe? That brings us to Peter Sisson and YAZA, a new platform that authenticates the place, time, and creator of each video. Yaza calls it “Certified Reality.”

Peter Sisson is one the brains behind Yaza. He is product-focused entrepreneur who has started 4 other companies. Peter also volunteers his time as a mentor to other startup’s through the European Innovation Academy. Last year Peter was named among the 23 most powerful LGBTQ people in technology by Business Insider.

“Lying on the Beach On Camera,” with hosts Steve Greenberg and Lois Whitman-Hess, is so excited to present this zoom discussion with Victoria Lang, one of the major producers in the theater world. She details her best understanding of when we may see live theater again.

Victoria has enjoyed an award-winning career in theatre, television, film, concerts and podcasts.

Victoria is a Founder and Co-President of Content of Broadway & Beyond Theatricals and was a Founding Partner and Co-President for over 15 years of PLUS Media, Inc., one of the largest producers of lifestyle programming for television nationwide.

Recent Broadway productions include TOOTSIE (Tony nomination), THE CHER SHOW, SYLVIA, 1984, and ESCAPE TO MARGARITAVILE. Her production of the smash hit MATT & BEN was called “The Hottest Play in New York” by Newsweek Magazine and “One of the Top 5 Plays of the Year” by TIME Magazine.

Lying On The Beach
Can Broadway Survive COVID-19?

Governor Cuomo created Project Cupid to help NY residents tie the knot during this pandemic.  Lying on the Beaches On Camera (LOBOC) Lois Whitman Hess and Steve Greenberg talk to Project Cupid participant — and you won’t believe who it is….LOBOC is powered by HandLNewYork.com

Lying On The Beach
Are You Aware of Project Cupid?

So Steve— first question— please explain to our viewers— what is licensing?

Lying On The Beach
Meet “The Brand Man"